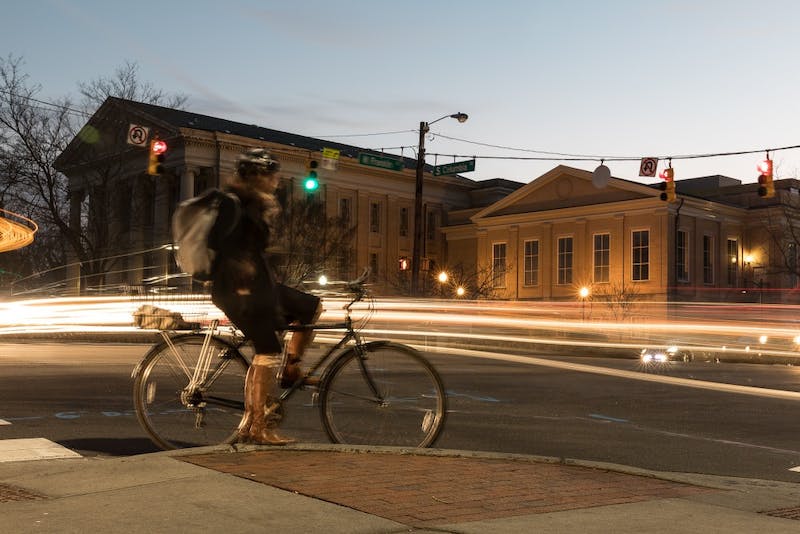 Pro Tem Mayor Karen Stegman said Chapel Hill was in a crisis when it came to street safety. More than 16 people have been hit by drivers at crosswalks in the past year, according to police department data.

More recently, a cyclist involved in a crash in late January on Franklin Street remains in critical condition and is unlikely to recover, according to a one-page Caring Bridge report on Wednesday.

According to a city news release, the Chapel Hill Police Department will continue to increase pedestrian safety enforcement operations with an emphasis on crosswalks.

Pedestrian safety will be reinforced daily by officers on duty and off duty. In addition, the Governor’s Highway Safety Program (GSHP) will fund two large-scale operations each week. Each GHSP operation lasts four hours and four off-duty officers are assigned to multiple areas.

The consequences of failing to yield to a pedestrian could include a $100 fine, approximately $200 in court costs, driver’s license points, insurance rate impacts, and civil lawsuits.

“We’re literally talking life and death when we talk about what we’re doing with our streets and how we’re making them safe for everyone, not just cars,” Stegman said.

With the North Carolina Department of Transportation set to resurface the street this summer, the restriping decision must be made first.

Downtown Special Projects Manager Sarah Poulton said resurfacing is a process of scraping the top layers of asphalt from the street, leveling it and replacing the top layer with new asphalt.

“Restriping is the process after resurfacing, referring to the replacement of approved pavement markings on asphalt,” she said. “The city has an opportunity at this point to have the street repaved by NCDOT in a different way than it does today that better meets the needs of our community.”

The restriping will be designed by Ramey Kemp & Associates.

The council was given the choice of in-traffic and curbside cycle lanes during the redesign.

Transport planning director Bergen Watterson said traffic cycle lanes are lined with parked cars on one side and moving vehicles on the other. Curbside bike lanes place cyclists between the sidewalk and parked cars.

Poulton said the curbside bike lane will continue to make room on the side of the street for diners on the sidewalk.

With curbside bike lanes, there is a risk of conflict between bikes and vehicles at driveways and intersections, Watterson said.

It is possible to add other protective measures such as vertical barriers between the cycle path and the traffic lane.

“I spoke to people in the cycling community,” said board member Amy Ryan. “They feel like there’s a safety edge with the traffic lanes.”

“I’ve often led bike tours,” he says. “I love it because you have riders who aren’t as experienced, or maybe haven’t ridden in 20 years, and having running is so much better for the riding environment. .”

Watterson hopes to design a public consultation process for the future design of Franklin Street by spring of this year.

“Both bike lane designs are paint,” Watterson said. “They may be changed in the future. It’s really just to give us a better street while we figure out what our always Franklin Street wants to be.

Should the US payment system have digital currency? | Opinion