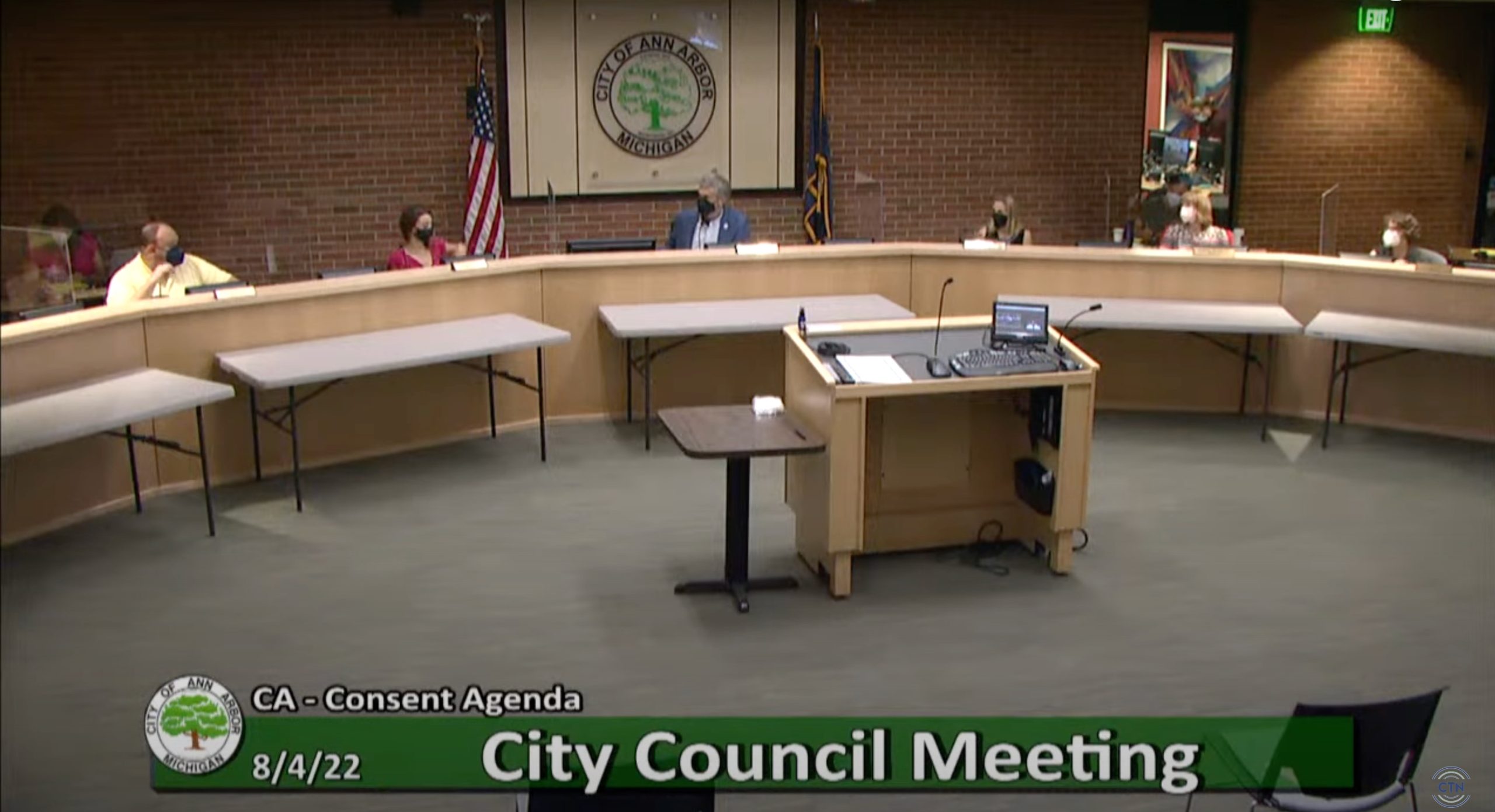 The Ann Arbor City Council met Aug. 4 to discuss the city’s response to Tribar Manufacturing’s Huron River contamination, backlash over an AAPD event flyer and more at the first meeting after the primary elections.

City Administrator Milton Dohoney Jr. began the meeting by informing council of the release of hexavalent chromium into the Huron River that occurred on July 30 in Wixom. Water Treatment Manager Brian Steglitz shared his perspective on the impact of the release on Ann Arbor.

â€œI would like to start with the comment that the drinking water in the city is currently safe to drink,â€ Steglitz said. “We at the water treatment unit are all focused because our number one priority is to ensure this continues to be true and that we will protect public health.”

Steglitz also provided updates on the response to the chemical release and the formation of a response team, which includes members from the city of Ann Arbor, the Environmental Protection Agency (EPA) and the Michigan Department of Environment, Great Lakes and Energy (EGLE).

â€œAs well as collecting samples and continuing to monitor and track the movement of this in our intakes, in Barton Pond we have also ordered materials which will arrive over the next day or two which will enable us to do studies of treatability over the next week to determine our ability to remove this chemical from source waters and we hope to have more information on this work over the coming week,â€ Steglitz said.

Steglitz said contaminated water can reach Ann Arbor between two weeks and a month from the initial leak. To prepare for the arrival of the contaminated water in Ann Arbor, Steglitz said the city is working to change the water treatment process to remove hexavalent chromium and will use the city’s second source of water: wells located on the south side of the city.

Steglitz also said there is no need for residents to store water or install an in-home treatment process.

In response to the chemical spill in the Huron River, City Council approved legal action against Tribar Manufacturing.

â€œTribar’s pollution of the Huron River needs to stop,â€ said Councilman Travis Radina, D-Ward 3. â€œWe in the city don’t have regulatory authority, but we have the ability to pursue aggressive and appropriate action in court seeking injunctive relief and damages and endeavor to do our part to cover our costs and be compensated for damages that accrue as a result of Tribar’s wrongdoings and I am convinced that we will.

Lisa Jackson, President of Ann Arbor Independent Community Policing Oversight Commission (ICPOC), then provided updates on a flyer the Ann Arbor Police Department (AAPD) shared weeks ago urging residents to “stand aside,” “bring the cops to court,” and “catch me if you can” for a series of community engagement events.

The names were seen by some residents as negative labeling and descriptions of punishment, WXYZ Detroit reported. In a now-deleted Facebook post featuring the events, commenters called descriptions of the events racist and horrifying.

â€œWhile the AAPD can be commended for making an effort to engage our community in settings outside of law enforcement, this incident demonstrated a long-standing issue with the department that it does not didn’t come to the Ann Arbor Police Department to invite the community to ‘get a reservation’ wouldn’t seem playful or fun,â€ Jackson said. â€œ(This) speaks to the urgent need for greater diversity within the department and better lines of communication between the department and the community. â€¦ Whatever the intentions of the AAPD, their message will not get through if they cannot use appropriate language for their very diverse audience.

Jackson also discussed the search for a new police chief, asking that the ICPOC be included earlier in the process, and advocated for the development of an unarmed response team.

â€œThis project and the potential development of an unarmed intervention program has the potential to meet the needs of so many disenfranchised groups within our community and it would be a huge disappointment if the potential for such a program was hampered due to a lack of imagination and creativity,â€ Jackson said.

Councilor Kathy Griswold, D-Ward 2, then reviewed the progress made by staff members over the summer.

â€œStaff (members) made significant progress in three areas: the first is under review by the Legal Department, Chapter 40, (et) relates to vegetation, and the revisions also included the possibility of replacing a lawn by a more pollinator-friendly natural surface coating,â€ Griswold said. â€œNumber two, the resolution for (the University of Michigan) workforce housing and this is based on the three principles of equity, sustainability and vision zero, which refers to transportation. One of the opportunities would be living learning labs for students and I am very grateful that a dialogue has started between the city and the University of Michigan. Finally, a meeting will be held tomorrow regarding the resolution to further optimize our initiatives.

The city council then voted to approve closures on Main Street for the 2022 football season and a closing on Washington Street for a fire safety event on September 21.

The city council also approved a professional services agreement with Black & Veatch of Michigan to design the UV disinfection system replacement project at the wastewater treatment plant at a cost of $307,401.

“Thank you to our city attorney for figuring it out and I think there’s broad support around the table for doing this,” Eyer said. “My feeling is just that our response can’t be strong enough or fast enough. This company has unfortunately proven to be a bad actor with PFAS releases with air quality issues and now this, and we must take all possible measures to protect our river and hold them accountable.

Life events, not bad decisions, can contribute to financial hardship | On your debt