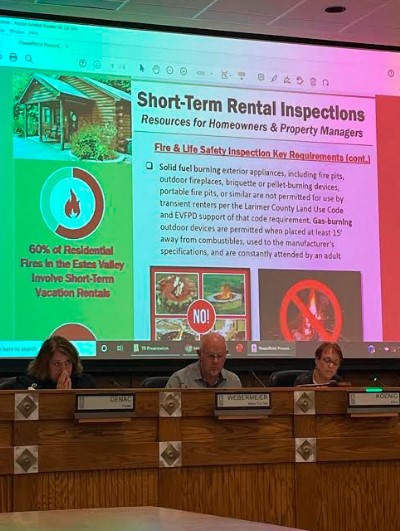 The Town of Estes Park Board of Directors held its regular meeting on Tuesday evening July 12th. During an evening of light discussion, the agenda consisted mainly of three applications for the transfer of liquor licenses and an application for an emergency order prohibiting the outdoor use of fire apparatus by the tenants of holidays.

Before the consent agenda was brought up, administrator Marie Cenac complimented the recent rooftop rodeo that wrapped up on Monday, July 11. Cenac mentioned that rodeo stock contractor Binion Cervi said this year’s event was probably the best he’s ever attended. Administrator Cindy Younglund also addressed the subject, thanking all support staff for volunteering their time to ensure the event ran smoothly.

The consent program adopted by the council included approval of a budgeted $250,000 overhaul of the Estes Park Visitor Center parking lot. Other items approved were a City Administrator Acceptance Policy Governance Oversight Report and Resolution 58-22 Agreement for Transfer of Ownership and Waiver and Release of Police Dogs with the town of Greley.

An emergency ordinance prohibiting the use of outdoor solid fuel appliances on vacation properties has been approved by council at the request of City Clerk Jackie Williamson. This restriction prohibits tenants of the building from using such devices, but not the owners of the establishment. This ordinance was previously placed on Estes Park by the Larimer County Fire District, but due to the separation of land codes in 2020, it needed City Council approval to be reinstated.

Williamson included in his request a statistic from the Larimer County Fire District that showed 60% of residential fires in the Estes Valley included short-term vacation rentals. Williamson elaborated on this statistic, saying, “The problem in theory is that foreigners who rent these facilities don’t know the area. This leads to accidents and errors, resulting in a high percentage of fires. »

Examples of fuel-burning appliances include fire pits, outdoor fireplaces, and briquette or pellet burning devices. The ban is an emergency order and took effect immediately. All vacation property owners have been notified after the vote.

Isabel Luna Gomez of Mexican restaurant El Mex-Kal has received approval for a transfer from Urbine LLC to Apoluna LLC. Gomez, who has worked at the establishment for 11 years, is the sole agent for Apoluna LLC and is now taking possession of the restaurant’s liquor license.

The first liquor license transfer approval for lodging and entertainment has been granted to co-owner of The Bull Pin bowling alley and sports bar, Brian Hauser. Hauser, along with Estes Park native Austin Sloan, start the bar and bowling alley at the location that once belonged to Chipper’s Lanes. Hauser explained the couple’s reasoning for the liquor license transfer, saying, “My business partner Austin Sloan grew up here and remembers going to Chipper’s when he was a kid. He didn’t like to see things deteriorate over the last few years, so he proposed the idea to me and together we decided to embark on this adventure.

Coffee on the Rocks owner Chuck Scott was the last individual in the meeting to have his transfer request approved. Scott’s request was straightforward, stating that he would add his daughter Mackenzie Scott to the license agreement in place of her brother who was the previous co-licensee.