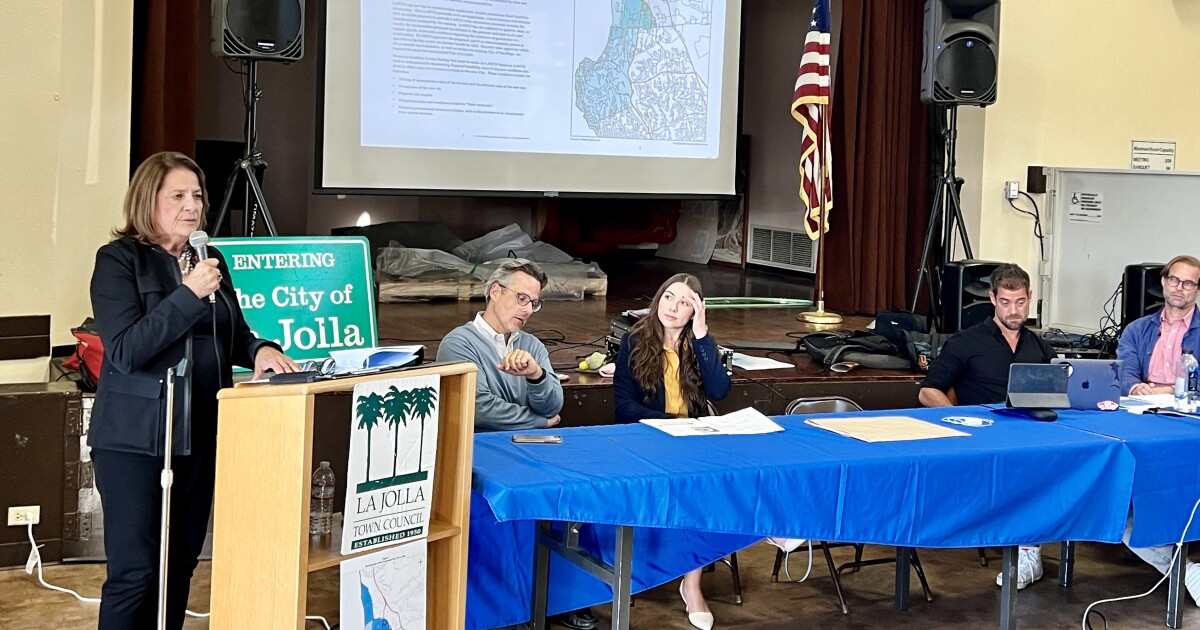 Should La Jolla become an independent city from San Diego? The La Jolla City Council addressed the issue in an online community forum and at the La Jolla Recreation Center on May 12, reigniting discussions from previous years.

“We can do a lot better for the San Diego area if we’re on our own,” he said. “We want to make the coast and our village the best it can be.”

La Jolla Shores Association President Janie Emerson, who is part of this group, said, “We are really excited about what this can do for all of us, but also for everyone in the city of San Diego. and also in California.

Should La Jolla try to become an independent city? Take our survey here.

City Council government liaison Cody Petterson said the Cortese-Knox-Hertzberg Local Government Reorganization Act 2000 contains the laws governing secession and that it is “easier to incorporate from the unincorporated county than to break away from an existing town”.

The main challenge to secession, Petterson said, is the “double majority voting rule,” which means a majority in La Jollans and then a majority in the rest of San Diego would have to approve the detachment.

In addition, Petterson said, if San Diego Local Agency Training Commission analyzes reveal there will be a negative tax impact, “you’ll have to pay mitigation payments.”

LAFCO chief executive Keene Simonds said it might take about three years of those payments to neutralize the impact of secession.

Still, Simonds encouraged La Jollans to look into independence. “I’m a big proponent of self-government in terms of synchronizing local decision-making with the needs of the local community,” he said.

He said La Jollans should ask himself, “Is incorporation desired and why? If it’s desired because you want to have self-control for the quality of life as you see it – roads, parks, level of public safety, community planning – well, then I say go for it.

“What we’re trying to do is make La Jolla better for everyone and everyone who comes here.”

Simonds said LAFCO would help La Jolla if it goes ahead, although “there is no guarantee it will be successful.”

He estimated the process would take two to four years, involving more in-depth budget analysis and convincing the rest of San Diego that it would be beneficial.

“I think you could make a point,” Simonds said.

Simonds said one challenge would be helping San Diegans believe that mitigation payments would be fair to the rest of the city.

Local resident Melinda Merryweather, who worked for La Jolla independence for decades, said, “I think we’re not trying to get La Jolla out of here by helicopter. What we’re trying to do is make La Jolla better for everyone and everyone who comes here.

With the current state of La Jolla, from potholes to deteriorating sidewalks and more, “we’re losing a lot of our history,” she said. “So all we’re trying to do is preserve what we have for the rest of San Diego.”

Merryweather said the mitigation payments “would be a benefit to the City of San Diego [for] … other communities that have less.

Kerr Bache said, “Ultimately, this is going to become a checkbook issue. It’s the organization, it’s the people, but it’s going to take money to do petitions and ballot initiatives.

The La Jolla City Council will meet next at 5:30 p.m. on Thursday, June 9, online and at the Recreation Center, 615 Prospect St. Learn more about lajollatowncouncil.org. ◆

This Week in Local Government