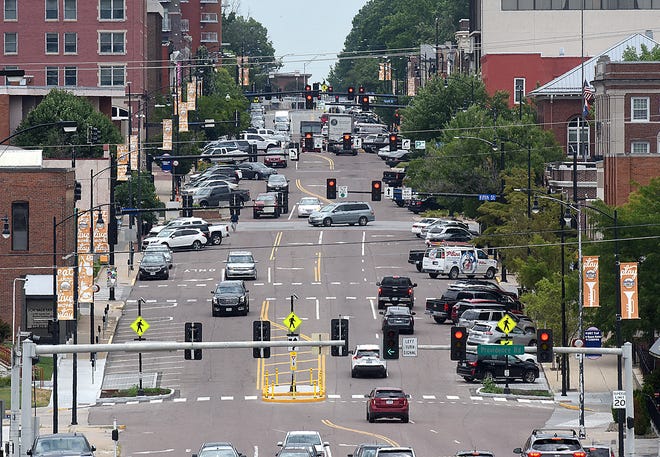 A new campaign from the nonprofit group hopes to change that, with cooperation and dialogue with city officials.

Columbia’s policy is now called Complete Streets. Adopted in 2004 with the help of Local Motion under its former name, PedNet Coalition, Dungey said it may have been good for its time, but is now very outdated.

“I’m a cyclist and I also drive a car and walk,” Dungey said. “I have a fairly high level of comfort. There are still roads in Colombia that I wouldn’t cycle on because I don’t feel safe.”

That’s not the case with motorized vehicles, she says.

“It just illustrates how we prioritize cars,” Dungey said. “There is no part of the city that you cannot access by car.”

People walking or cycling are involved in less than 3% of crashes but account for nearly 24% of road deaths, a Local Motion press release on the campaign says. The data comes from the Missouri Department of Transportation, Dungey said.

Current policy only lip service to people walking, cycling and using public transport, while streets are primarily designed for cars, the statement said.

Local Motion doesn’t want to criticize the city too much, but there’s room for improvement, Dungey said.

Committed cyclists interviewed recently says Columbia is a cycling city, with some exceptions. George Smith, a retired University of Missouri professor and Nobel laureate, said Columbia isn’t like Madison, Wisconsin, where he can get anywhere on a bike path.

“We could do better,” Smith said in June. “Our trail system is somewhat incomplete. It’s still pretty good.”

Rikki Ascani, director of community engagement for Local Motion, is heavily engaged in this phase of the campaign, she said.

“Columbia has a lot of great trails,” Ascani said. “But a lot of people can’t get to where they need to go.”

Streets built for all users are also safer for car drivers, she said.

The campaign does not plan to make demands of city officials, Ascani said.

“Our goal is not necessarily to write all the policy for them, but to give them advice,” Ascani said.

“By signing this petition, you will let the city council know that it is time for Columbia to have a livable streets policy,” the petition reads. “Livable streets mean improving the design of our streets for safety, using taxpayer dollars more efficiently so we can maintain what we have, and catching up where we have fallen behind so that walking, cycling and public transit are real options for getting around.

“To have livable streets, we need to close the gaps in our sidewalks, build protected bike lanes and create a convenient bus system. This will allow children to walk to school safely, allow people to get around more efficiently, save taxpayers money so the city can fill potholes, and ultimately save lives.

“A livable streets policy will build a transportation system that works for all of us.”

The campaign doesn’t ask the city to spend a lot of money, Dungey and Ascani said.

“Making streets bigger for everyone who uses them doesn’t always translate to being more expensive,” Dungey said.

“We’re not necessarily asking the city to spend more money,” Ascani said. “We’re asking them to spend the money differently.”

The campaign held an information event on Saturday at the Ragtag Cinema. Upcoming events include those at 7 p.m. Tuesday at Rock Bridge Christian Church and 5 p.m. Wednesday, July 27 at Waves Cider Co.

The campaign will continue until the end of the year, but Ascani said the group plans to present its petition at a meeting of the Columbia City Council in the fall.

The campaign is funded by a $372,000 grant from the Missouri Foundation for Health. The grant funds the website, food and supplies for events, and other campaign-related costs, Ascani said.

“We are a philanthropic changemaker focused on systems change as a mechanism to achieve health equity in Missouri,” Stewart wrote in an email. “Our funding is in collaboration with those who share the same hopes of achieving health equity and are working towards it.”

Roger McKinney is the Tribune’s educational reporter. You can reach him at [email protected] or 573-815-1719. He’s on Twitter at @rmckinney9.