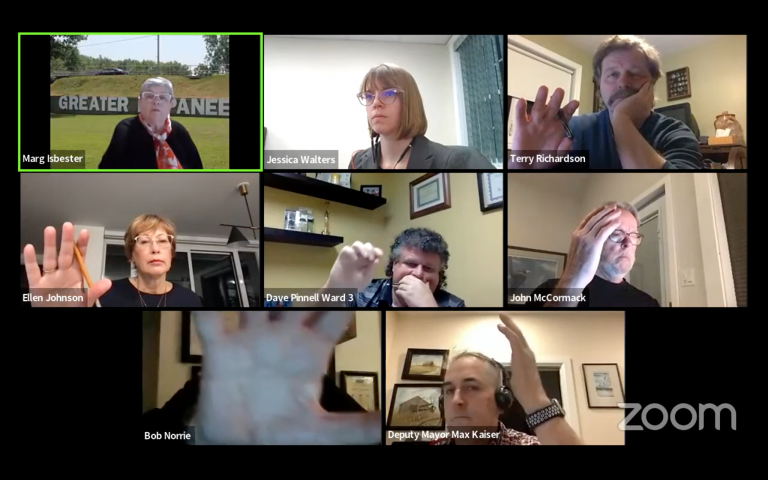 In June, Greater Napanee residents should expect to see plenty of rainbows as the city prepares for its first-ever public celebration of Pride Month. An inaugural Pride March along the Napanee River is scheduled for June 5, 2022, with support from community members and the Greater Napanee Gender and Sexuality Alliance (GNGSA), a Greater Napanee Pride planning group. Napanee 2022 (GNPPG).

On Tuesday, February 8, 2022, two correspondences for action were presented to the City of Greater Napanee during regular council session.

The first correspondence was submitted by Brad Way, who recommended that Council “proclaim June 2022 Pride Month in the City of Greater Napanee.” Way’s correspondence to the Council noted that “members of the community began planning for Pride 2022 for Greater Napanee,” which happened in response to what Way describes as “the strong interest in maintaining a safe space to live and celebrate our differences as a community.

“It’s about inclusion, acceptance for all”

Way and GNPPG received Council’s support for the City of Greater Napanee to proclaim June as Pride Month, which was moved by Deputy Mayor Max Kaiser and seconded by Councilor Ellen Johnson, all being in favor of adopting the motion.

“I have no problem [with the proclamation]Kaiser said during the meeting. “It’s a joyful thing, it’s a happy event. I think that’s something a lot of people can support. It’s a question of inclusion. It is a question of acceptance for all.

The second motion, presented by GNPPG, was to proceed with the group’s request for proclamation to Council on Tuesday, January 4, 2022. The recommendation was “that Council note and receive correspondence from the 2022 Greater Napanee Pride Planning Group; and further, that Council refer the request to staff to continue working with the applicant on their proposed 2022 Pride celebration options.” Councilor John McCormack moved the motion to note, receive and approve correspondence and, with the majority of council in favour, the motion was carried.

“Countless stories of admiration and appreciation for the effort”

Mayor Isbester did not seek or receive comment from Council on the four-page letter of correspondence submitted by the GNPPG, which detailed the group’s initiatives to commemorate Pride Month. Initiatives to include: painting the Center and John Street walkway at Market Square in a rainbow, such as the example foamed by the rainbow crosswalk in front of Kingston City Hall ; a request for the Pride Flag to be flown at Napanee Town Hall and Market Square for the month of June, in addition to the GNPPG-funded Rainbow Street Light Banner Hanging with the assistance from municipal staff for the installation, and; a request to paint the Greater Napanee sign at Lion’s Gate Park, with the help of Community Living volunteers, in the colors of the rainbow.

“Since painting the city with rainbows, we have heard countless stories of admiration and appreciation for the effort,” the correspondence read. “More than that, we heard that Greater Napanee wants more and needs more. Our community, which is known for its unwavering support of the efforts that bring us together, is very hungry to bring the Pride movement here in full force so that no matter who you love or how you identify, you will feel safe, valued. , equal , and proud to live in Greater Napanee.

Deputy Mayor Kaiser said Council would consider the motion to display a pride flag at City Hall “later” but did not comment further on the matter. This is despite the fact that the issue of Napanee’s “community flag and proclamation policy” was on the agenda for the meeting, including a report from city staff on the policy, which recommended that “Council notes and receives Legislative Services – Community Flag and Proclamation Policy”. report; And further, that Council approves the amendments tabled [sic] the Policy on Community Flags, Art Installations and Proclamation; And further, that Council approve the flag policy at half mast as presented. »

The topic of displaying pride flags in Greater Napanee has been in conversation since 2019. In June of last year, the motion to display the flag at City Hall was defeated and a flag was installed instead at North Fred Hall, a much less prominent or accessible location. By continuing to press Council to display the flag at City Hall, starting this year’s conversation early, and offering multiple locations around the building, GNPPG hopes this year will finally be the year the flag will fly.

“We believe [this is] an essential initiative for our community, to help [Greater Napanee] become a more welcoming and inclusive place where all people feel comfortable living their lives as themselves,” GNPPG leaders Brad Way and Robert Dorey wrote in their correspondence to the Council.

According to the correspondence, the GNPPG has a “wider schedule of activities planned for the month of June in progress,” which includes the Pride March on June 5, a barbecue lunch afterwards, and a craft market featuring crafts. local LGBTQ2S+ artists.

Planning for Greater Napanee Pride Month celebrations is open to the support and input of all members of the community. The GNPPG encourages both the Council and the community to like, share and engage with their Facebook group to make this inaugural year one to remember.

“We hope this year’s event will be just the beginning of an ongoing program to develop a safe space in Greater Napanee for LGBTQ2S+-identifying individuals and to promote a welcoming and inclusive community for all,” wrote Way and Dorey.

The full agenda for Napanee City Council‘s meeting this week is available here, and the full meeting can be viewed on YouTube here.