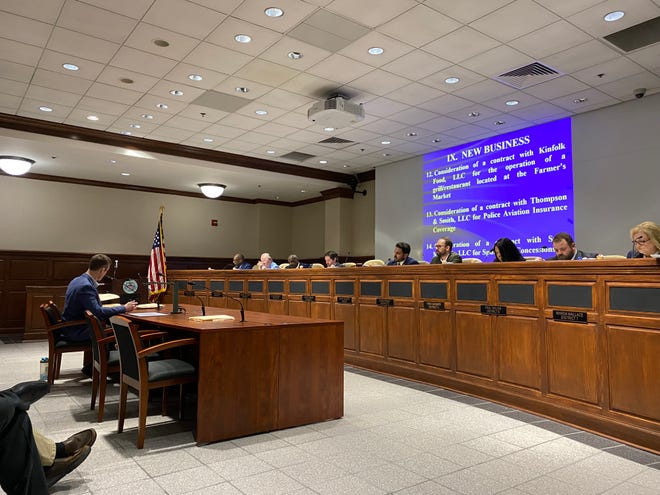 The April city council meeting was packed, with a full house and an even busier agenda.

One update was particularly exciting on the highly anticipated Great Wolf Lodge, whose construction is still set to begin this fall.

A budget amendment was passed to allow $300,000 to go towards designing the construction of the road leading to the site, which Mayor Scott Conger calls “essential”.

“I think this is an exciting step in the process as we move forward with our Industry Development Council and finalize our agreements with Great Wolf Lodge,” he said. “Our original agreement was that we would build the access road, so this is the start of that process.”

Construction of the site and the road can take place simultaneously, Conger explains, thanks to an alternate access road for construction machinery that already exists. This will allow projects to be completed even faster.

Conger hopes to be completed with the road at the same time as the lodge itself is completed.

“In an ideal world, we will be done designing and building the road in December 2024, alongside the entirety of Great Wolf Lodge,” he said.

On other street issues, a motion passed first reading to allow a total of $112,750 to be removed from the $5.8 million street resurfacing budget to fix 41 “traffic signal loop detectors which were malfunctioning.

According to councilman Paul Taylor, voters had contacted him about “traffic loops”, so he immediately contacted city engineer Tom Wolf.

“I have received complaints from a few citizens about fire loops,” he said. “You know when you stop at a traffic light and it changes because it detects you? It wasn’t happening.

Engineering department personnel “immediately came out and investigated” and found the damaged sensors – 41 of them.

According to Taylor, investigators found that in 2019, when the original street assessment plan was drawn up, some of the traffic sensors had been damaged.

A list of the exact damaged sensors is not yet available, but work should begin shortly to fix the problem.

“People will be pretty happy to have these fixed, I imagine,” Taylor said.

The money spent on the sensors will be part of the remaining $2 million after about $3.1 million was spent on Phase 1 of the paving project, which has been named ‘the largest paving project in a single year” of the city.

A total of 43 streets have been paved so far, with phase two expected to begin as soon as the weather warms.

Wolf said at the city council meeting that he expects a possible $500,000 to $700,000 of funds to remain when the entire project is complete, which will allow the department to “maybe pave a road or two.” additional”.

In a silent and brief vote, the new redistricting plan was adopted at second reading, despite the reluctance of council members a few days before.

The plan, which was originally presented by local NAACP President Harrell Carter at a special meeting in March, claims to provide “more equitable representation” for citizens of Jackson, especially people of color. .

“Sometimes we are afraid of change… but this (map) creates opportunity,” Carter said, during a public meeting last week regarding the map. “We have a chance to have some influence on the decisions of the city. That’s also what it means. Keeping people crammed into a neighborhood is not the way to go.

“We’re going to take more territory – yes, it’s not the original, but it gives us more power.”

The map was chosen in a lively series of city meetings over the city’s own proposed map.

“I fully anticipated a discussion, but there really wasn’t,” Conger said, after Tuesday’s silent vote. “But the board has made its decision and it will change some responsibilities.”

It passed by a vote of 6 to 1, with council member David Cisco voting no and Gary Pickens absent.

The Arts District will bring more art to the community

City Council also approved the creation of a Jackson Arts District, paving the way for further grants and downtown involvement in the arts community.

“We’re really excited about this one,” Conger said. “We missed out on some great grants because we don’t have a dedicated arts district.”

The plan encompasses the heart of downtown Jackson.

“We tried to encompass everything we already have in terms of the arts – Civic Center, the Depot, the Ned, the arts council offices, all of those things – to really make it a place where the community can collaborate in the arts,” Conger said.

For residents wondering what this means for them, Conger said it’s not much yet.

“No tangible changes will be visible to the public yet, but as we raise these funds, get grants and launch some of these projects, there will be tangible changes,” he said.

Changes such as public projects, murals, green spaces, etc. will begin to appear on the horizon.

“It will be really great for our community,” Conger said.

As previously reported by The Sun, The City of Jackson recently received the result of the 2021 audit, which found “manageable” issues, primarily related to the city’s outdated record-keeping systems.

“We need to move the city forward on technology,” Taylor said at last week’s Budget Committee session, where the audit’s findings were initially presented. “A lot of it comes down to this: the way we do these things takes a lot of manual effort, and that manual way leads to a lot… of potential for error. When we’re running things from a spreadsheet instead of a program, it’s laborious to make sure those things line up and are plugged in correctly. »

The city will soon update Tyler Munis software, a financial software that Taylor says will improve the city’s margin for error.

“I think the software is going to help us a lot to tighten up and understand, and be able to accurately report on things that need documentation,” he said.

The audit also revealed that the city’s “rainy day fund” was in the best shape it had ever been.

Through a combination of state and federal aid, tight spending, and the 2020 shutdown, 2021 saw the general fund balance climb to $28 million, up $8 million from 2020 numbers.

“Last year we had the second half of the furlough program, no summer camps, many services closed and departments at reduced costs,” Taylor said. “And we have seen this trend of massive growth in sales tax, as well as CARES Act funds and other federal relief funds. So that’s where you see that $8 million swing at the end of the year.

The city aims to balance frugal savings with spending on needed items, and hopes to reduce the city’s “unrestricted funds” — which currently make up 38% of the budget — to around 30%.