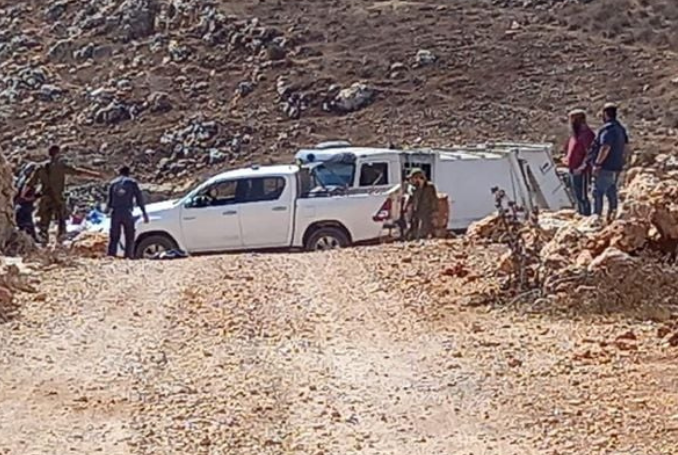 Jewish settlers today hijacked a garbage truck belonging to the Palestinian city council in Qus, near the West Bank city of Nablus, and took it away, according to the official Palestinian news agency WAFA.

Ghassan Daghlas, the head of the settlements file in the Nablus region, told WAFA that Jewish settlers surrounded the garbage truck as it continued with his daily work, and requisitioned it at gunpoint. Israeli soldiers called into the area covered the settlers.

The residents of Qusra attempted to retrieve the truck from the settlers. The soldiers, however, intervened on behalf of the settlers and forced the residents to retreat.

Settler violence against Palestinians and their property is common in the West Bank and is rarely prosecuted by Israeli authorities.

“The violence of the Jewish settlers should not be analyzed separately from the violence inflicted by the Israeli army, but seen in the larger context of the violent Zionist ideology which fully governs Israeli society,” the Palestinian author wrote and editor-in-chief of The Palestine Chronicle, Ramzy Baroud.

Settler violence, permitted by the Israeli military, is part of daily life in the occupied West Bank.

Our municipal leaders @BoardofDeputies @BoDPres need to go beyond condemnation of racist rhetoric in the Knesset and condemn this violence. It is part of the same system of oppression. https://t.co/v4KjsyOX9z

“Settler violence has long been a part of daily life for Palestinians under occupation,” according to Human Rights Group B’tselem. “The Israeli security forces allow these actions, which result in Palestinian losses – injuries and deaths – as well as damage to land and property. In some cases, they even serve as an armed escort, or even join in the attacks ”.

Between 500,000 and 600,000 Israelis live in exclusively Jewish settlements across occupied East Jerusalem and the West Bank, in violation of international law.