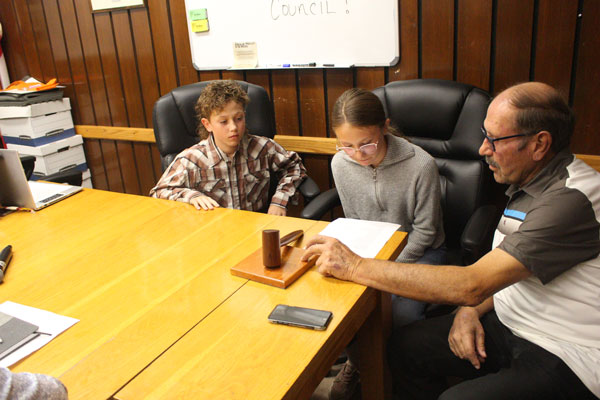 A pair of pupils from Birch Hills Primary School got a taste of what it’s like to do business at City Council on Wednesday, October 19.

The opportunity arose after 5th grade teacher Josh Donauer reached out to Mayor Stewart Adams to see if he would come talk to the class about what it’s like to be mayor. Adams accepted the invitation and visited the class last month.

“I think it’s really important for young people to be exposed to councils and democracy and how it works,” Adams said.

“(Councillor) Graham (Twetan) and I went to class and sat down and Josh was kind enough to ask the kids to ask questions and he sent them to me ahead of time,” he wrote. he adds. “Then Graham and I answered that and answered any other questions they had.”

The list of questions included tough points like whether Birch Hills elected officials regret running for public office or how much money they make in their roles as mayor and councillor. However, there were also civic-minded questions like “what are some of the responsibilities of the mayor and councillors”, as well as personal questions like what made them want to run for public office in the first place.

A student asked if there was a limo in town.

“Does the mayor show up for work every day in a limo? I’m lucky if I get here in half a ton,” said Adams, who served on council from 2007 to 2012 before leaving politics for a decade and returning as mayor in 2022.

According to Donauer, the most pressing question was which house Adams lived in.

“I have a big rock in front of my house,” Adams told the class.

At the end of the meeting, Adams and Twetan invited the class election winners to visit the Birch Hills council.

The election took place about a month ago when Twetan and Adam visited the class.

Adams gave Cochrane and Shore a quick crash course in chairing a city council meeting before the duo took over. The students were responsible for calling the meeting to order with a Multicultural Day statement and correspondence. Cochrane chaired the start of the meeting before Shore took over for the final part.

Shore said he was excited to chair the meeting and Cochrane said she was nervous.

“That you don’t drink weird stuff to become mayor,” Cochrane said when asked what she learned from the visit.

It may sound strange, but class elections at Birch Hills Public School can get quite competitive.

Cochrane is entering her second term as president after winning in a split 4th and 5th grade class last year. Donauer said the class takes the election very seriously, with candidates promising their classmates they’ll do things like eat a worm if they win.

In Cochrane’s case, she had promised to bring her cat to school, but the year before she had drunk hot milk, a box of hot juice and finished with hot yoghurt.

Shore countered by promising to take the class to the wave pool, a wish he has yet to fulfill.

“I can’t do it because she’s president and I’m vice,” Shore said.

Cochrane said she couldn’t be pressured into making it happen.

Cochrane was able to do two terms because last year there were split afternoon classes. Donauer’s class is the only one in the school that has an election. He said the goal is to help students understand how governments are chosen and hopefully this will lead to students taking on leadership roles as they enter high school and college.