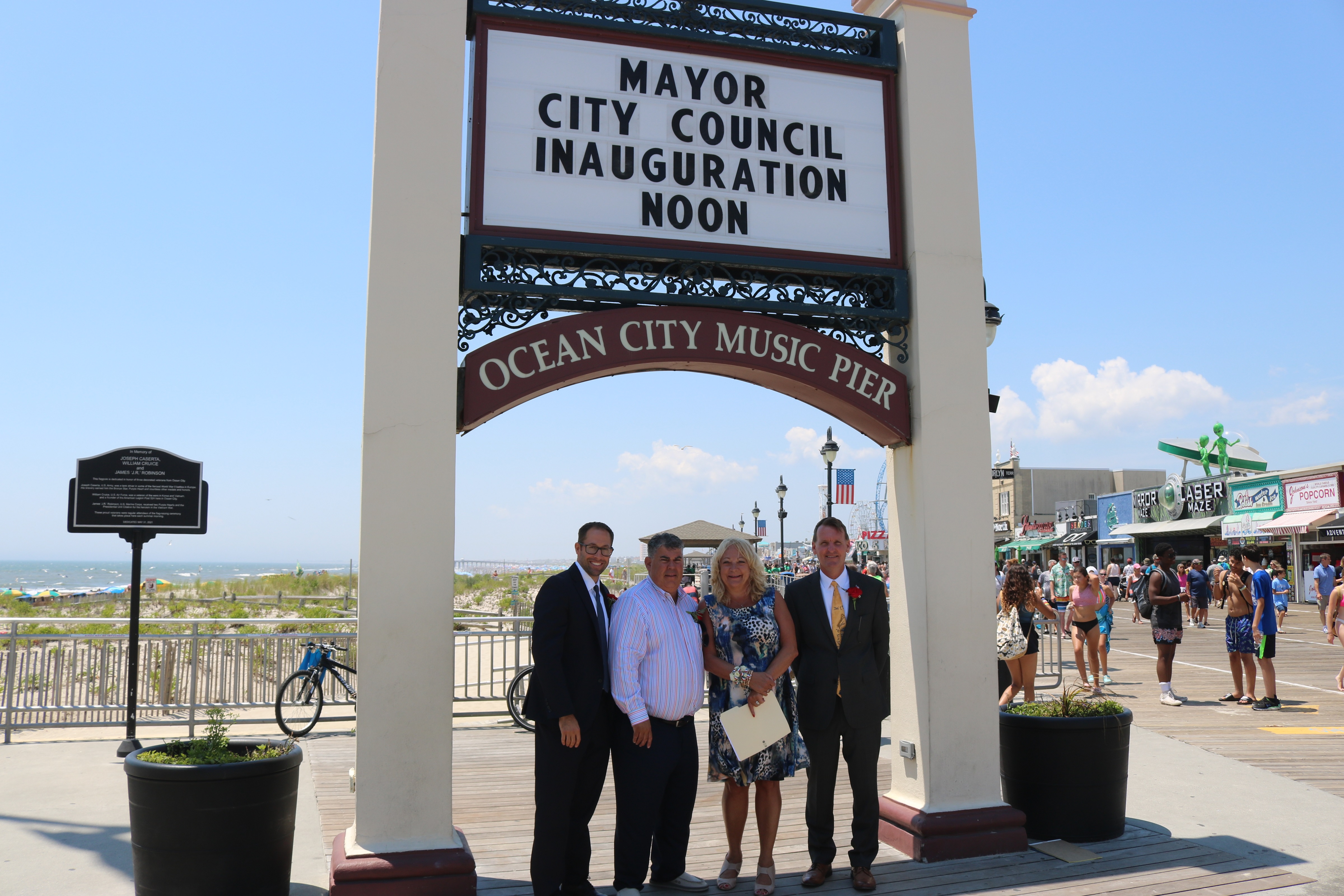 Promoting the themes of unity and teamwork, Mayor Jay Gillian and three members of City Council were sworn in for four-year terms on Friday in a ribbon-cutting ceremony that reflected a sea change in the composition of the government of Ocean City.

Gillian was sworn in for her fourth term after her victory in the May 10 election over challenger Keith Hartzell, who had been the city council‘s longest-serving member. Hartzell gave up his Council seat to run against Gillian.

Three Council-at-large seats were up for grabs in the election. Council incumbents Pete Madden and Karen Bergman and political newcomer Tony Polcini, the election winners, were also sworn in on Friday.

In a 7–0 vote, Madden was named Chairman of the Council and Bergman Vice-Chairman in the Council’s reorganization.

Madden, who served as Chairman of the Council from 2016 to 2019, returns to this leadership role. He succeeds Councilman Bob Barr, who served as president for two years. Bergman took over as vice-chairman from Councilman Tom Rotondi.

During his inaugural address, Gillian said he looks forward to working with Madden, Bergman, Polcini and the other Council members in a way that will benefit the city and its residents. But he stressed that “there is still a lot to do”.

Among other things, Gillian thanked her supporters, city employees and family members, including his wife, Michele. He got emotional talking about his father, Roy Gillian, former mayor of Ocean City, and his late mother. Roy Gillian sat in the audience at the Ocean City Music Pier during the dedication ceremony which was attended by more than 100 people.

“I thank my father for everything. He gave me so much. There’s no way I would be here if it wasn’t for him, and also my mom,” Gillian said.

Gillian also reaffirmed her faith in God, telling the audience that he had started attending daily Mass before the election to help gather her spirits during a ‘depressed’ time in her life.

“It gave me a peace that I had never felt before. I believe it made me a better person,” he said.

As elections approached, Council meetings often became divisive over political disagreements between Gillian’s administration and some members of the governing body.

However, Madden, Bergman and Polcini, who called themselves the “Big 3”, ran on a ticket that backed Gillian rather than Hartzell.

As Gillian did in her inaugural remarks, Madden, Bergman and Polcini gave thanks to God, their followers and family members, among others. They all spoke of the honor it will be for them to serve as elected officials.

Madden emphasized the need for cooperation and teamwork in Ocean City government.

“In our city, there are many unique parts that keep Ocean City moving forward and running smoothly,” Madden said. “As in a family, a company and in sport, teamwork and cohesion are essential to progress.”

“I also know that does not mean that there will not be disagreements or discussions on sensitive subjects, but I know that as an elected official, it is about meeting the needs and desires of the community. This will keep Ocean City ahead of the curve,” he added.

Bergman also spoke about the importance of teamwork during his speech.

“This is a team led by Mayor Gillian and his administration: a team that takes the issues of the citizens of our great city seriously. A team that understands the importance of communicating with the community. A team committed to fixing our infrastructure. A team that listens to community concerns and works tirelessly to address and correct them,” she said.

“But above all, a team that pulls itself together through the storms, and more recently, the pandemic,” she continued.

Bergman, the only woman on the seven-member Council, also pledged to bring “a common-sense female perspective to the issues at hand.”

“I am dedicated and committed to continuing to serve you as a woman with integrity, passion, honesty and transparency,” she said.

Polcini took to the podium to deliver his inaugural address after Gillian, Bergman and Madden ended. Alluding to his status as a political novice, he made the audience laugh saying, “They let the new guy go last.”

Polcini got emotional at times when talking about his family and the commitment he will make to “this wonderful opportunity to serve our community.”

“I’m proud to be an Ocean City (resident), true and true. We were born and raised in this wonderful city we call home. I am proud to be able to use this City Council platform to represent the wants and needs of this great city, while remaining committed to my faith in God, my family and the traditions of Ocean City,” he said. he declares.

As a newcomer to the political scene during elections, Polcini said it was always important for him to “stay true to who I am and what I believe in, knowing that sometimes those lines might be blurred.”

“I promised during the election campaign that I would look at all sides of an issue, find out about possible outcomes and decisions, and make recommendations based on what is best for the citizens I was elected to represent. I’m not a guy yes, but rather someone who prides himself on doing the right thing, even when the task can be very difficult,” he said.