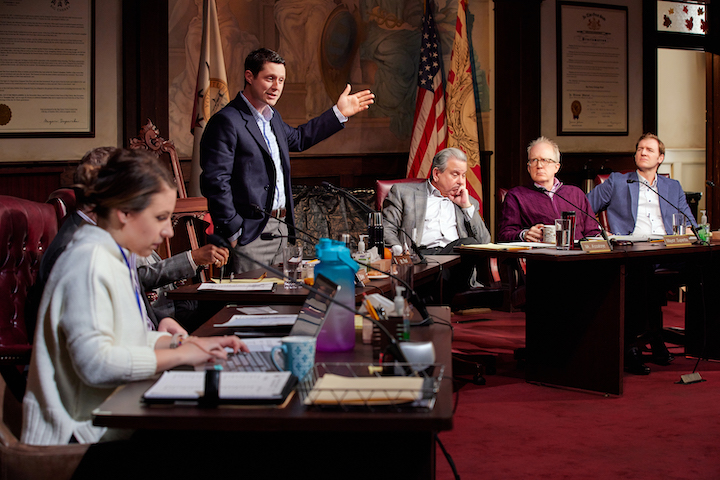 ‘The Minutes’ takes the audience inside a small town council meeting

Playwright Tracy Letts is troubled. And like any great artist, he turned his unease into a spiky, thought-provoking new piece that dismantles our understanding of democracy. Minutes, playing on Broadway at Studio 54 through July 24, takes viewers inside a town council meeting in the town of Big Cherry. A storm is brewing outside, but nothing like the tsunami about to unfold there.

Letts’ work premiered at Chicago’s Steppenwolf Theater Company in 2017, and the division of this moment in our nation’s political history is palpable and further amplified by the continued polarization between local and state governments.

The issue at the center of the meeting is the unusual dismissal of a Carp board member (Ian Barford), who at a previous meeting questioned the buying and selling of “lost or stolen” bikes. and the involvement of fellow board member Assalone (Jeff Still).

The incident knocks the lid off a Pandora’s box, from the renovation of the central fountain and the city’s statue to make it accessible to people with disabilities to the origins of a statue itself, designed to honor a soldier who would have restored order in the city. after a particularly bloody battle.

What begins as a light riff at the Waiting for Guffman takes a dark turn as the true story of the town’s name and history – particularly regarding the Sioux Native Americans who originally occupied the land – comes to light. The cast, many of whom are part of Steppenwolf’s trusty ensemble, including K. Todd Friedman, Sally Murphy and Letts himself, paint a disturbing portrait of America’s penchant for revisionist history. Thundering sound effects from sound designer André Pluess amplify the proceedings, and periodic blackouts from lighting designer Brian MacDevitt (the most telling of which occurs when council members rise to recite the oath of allegiance), merely escalate the procedure.

Minutes takes an otherworldly twist in its final moments, which is sure to spark some debate among those in attendance. It is perhaps this civil discourse that Letts was inspired to explore and dismantle – a reminder that theater has the power, if not to transform, at least to challenge the beliefs we have come to assume. be facts.

Matthew Wexler is a nationally recognized editor and writer. Learn more about his work at wexlerwrites.com.

‘The Minutes’ takes the audience inside a small town council meeting was last modified: May 1, 2022 by Matthew Wexler